In May 1903 a group of land seekers from Utah set out from Stirling and explored land as far east as Medicine Hat. This group included William Hull, his sons, Thomas, James, and John as well as C. Sherwood. On June 9th they staked out property and filed claims on land adjacent to a CPR water tank in the vicinity of present day Taber. William Hull built the first home in the community.1

Soon after their arrival in the area, they were visited by LDS Apostle John W. Taylor, Alberta2 Stake President Heber S. Allen, and Patriarchs Heeman and Wolfe of Cardston. Taylor predicted “that eventually the Latter Day Saints would settle there. In the meantime he advised the people to wait.1 ”

In spite of the caution, the settlement grew and by March 1904 a branch was organized. In October of the same year it was elevated to a Ward. 1 In 1948 the Taber 2nd Ward was created. In 1960 the Taber Stake was formed from parts of the Lethbridge Stake, Calgary Stake and Western Canadian Mission.3 By 1961 a third Ward was added to the community.3

1.
Budd G, ed. The Taylor Stake of Zion. Raymond: The Chronicle Print; 1906.
2.
The source says Taylor Stake, but the Taylor Stake wouldn’t be formed until August 1903. This visit is said to have happened in June.
3.
Tagg MS, ed. A History of the Mormon Church in Canada. The Lethbridge Stake; 1968.
By mormonsettlement
0 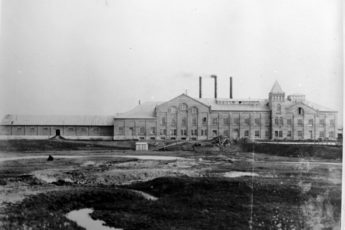